Every spring is riddled with odd auguries and peculiar sightings, this one no more than others perhaps, save the stepped up and persistent sense of doom that whistles through the nightly news as the world lurches from crisis to crisis. The cumulative weight of loss, displacement and sorrow seems to grow ever greater; species are crashing, so too our efforts at diplomacy, and environmental controls. Callous nations slam their gates and stop their ears against their neighbours’ pleas for shelter, for assistance, for a small and reasonably safe space to exist, as if this is an outrage, a demand for too much in a time of straitened resources, as if to ask already means you can’t be counted among those who are worthy of care. Meanwhile, the rich grow ever richer, popping the buttons on their already massive suits; white supremacists bleach their national stories and the ranks of their political elites; rapier rattling, talk of war and end times lopes through the nights.

To bear witness to, to protest against and to record what really happens—these are crucial callings. So critical indeed that it can at times seem irresponsible to cut ourselves loose from such preoccupations. But we must not also forget, we humans, immersed as we are in the intensities of our self-regard and self-production, to open our eyes to other things, like what the dog smells along the deer track at the edge of the yard, or how sweetly the sparrow sings from the top of a nearby tree.

We were taught to eschew the romantic effusions of the “pathetic fallacy” when I was a student, the notion that the non-human world might be animate and communicative in ways recognizable to us; we were urged instead to adopt a more measured, modernist and rational style, (a style befitting those who like to think they have dominion over all of the earth). I think however there is much to be said for noting the mystery and motion of what is not us, perhaps even for reversing the charges, and imaging that what is that is not us in the world is what speaks and we are just its dull echoes. 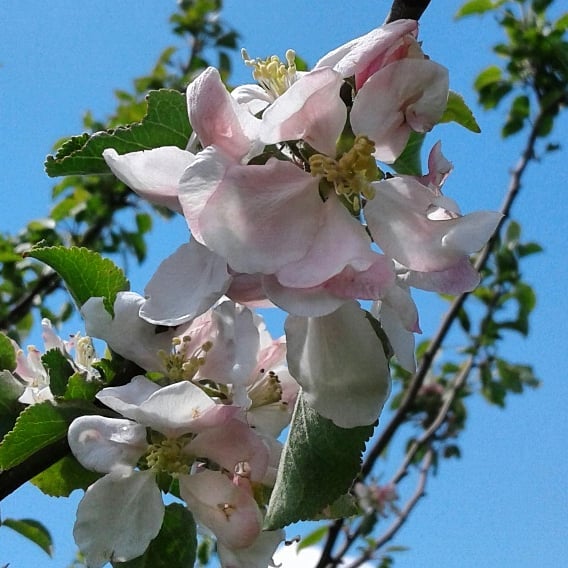 When we go for a walk in the evening rain, the apple trees are full of small grey birds eating the apple blossoms. Fragments of petals flutter through the damp air like snow.

Back indoors, wind skirls at the eaves. We light a fire. The weather forecast calls for snow in Newfoundland and the Cape Breton Highlands. A cold rain continues throughout the night.

Morning arrives cold enough to keep a fire burning. The wind blows; droplets of water cling to the needles of the Austrian Pines. I look out at the grey water, at the ripples streaming across the bay, and think about kayaking in the islands a few days ago. Bohemian Waxwings in the apple trees eating apple blossoms, and out beyond the nearest islands, where the sea rises and falls in long deep swells, we watched thousands and millions and billions of little white flakes drifting in the water column as far as we could see: tiny newly bloomed moon jellies, no bigger than an infant’s fingernail and nearly transparent, the four dots of their sex organs visible inside each one as they fluttered in their multitudes through the ocean currents.  Somewhere, not so far below perhaps, the polyps that were their progenitors and whose similars their descendants will be are stuck fast to rocks or seaweed or sea floor. Such strange snows this spring.

We go for another walk and the apple blossoms have all been torn apart; the denuded calyces at their centres curl brownly in the wind. On the grass, a rain of fragmented petals drying to dust.

What is visible poetry?

What if we thought of poetry as something visible everywhere? Much of what we call poetry IS blogging of a sort, a lyric voice meandering through the sounds and images and movements of the world, trying on sensations and seeking interlocutors. Visible Poetry: Aesthetic Acts in Progress continues to explore the expanding some horizons of this oldest of forms.

The complete archive of an earlier incarnation of this blog may be found here: